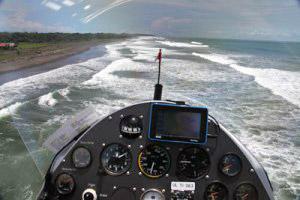 It all happened because of a Roundtrip with a Gyrocopter in the Hotel and Flying center Flying Crocodile in Guanacaste, Costa Rica.

My wife and I would have never booked a 8h flight trip with Ultra light aircraft but the stability and comfort of the auto gyros are amazing and after 20 min tryout we were sold. Among all the tours that are offered there was one destination we always wanted to go: Corcovado Peninsula de Osa. The adventure started the next day in the early morning.

We packed our luggage (light weight) for 3 days while Guido and Frank, our pilots prepared the planes for the flight.

We took of by sunrise and started our journey along the beautiful beaches of Guanacaste: Samara Coyote, ST Teresa Malpais ,flying over untouched beaches surfing the waves like the pelicans.

Entering the gulf of Nicoya we climbed up to 1500m to cross the gulf and got some nice views on the gulf, Islas de Tortuga and Puntarenas

After10 minutes up in this altitude it started getting a little chilly and I was happy to come down again. The next highlight were the crocodiles of Rio Tarcoles.

Flying in low altitude over the river was another amazing experience and even though what we were doing was spectacular, it felt smooth and save the whole time. 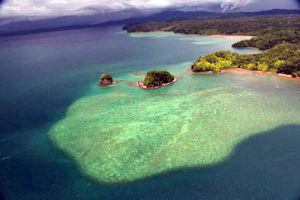 Next, I found myself cruising along the endless beaches of the central pacific coast. Here, we spotted some huge groups of fish, mantas and even some dolphins were crossing our way before landing in Quepos, where we had a nice breakfast and a chance to stretch our legs before starting the second part of the trip. I could not believe that we already had covered half of the distance of our trip!

Right after takeoff we overflew Manuel Antonio national park and its beautiful beaches before setting course to Dominical and Uvita. In front of Uvita we flew over Bahia de las Ballenas, also called the whale bay. This is the place where the humpback whales come to get their babies. We climbed up to 500m to get an overview and I couldn’t believe it! Bahia de las Ballenas really looks like a whale tale itself is this coincidence or do the whales know about this?

We circled over Bahia for a while but unfortunateley we did not see any whales, so we left this for our way back and continued our trip towards Sierpe. Bordering the huge mangrove area of Corcovado, which is one of the biggest of Central America, we got the feeling of flying over the Amazonas pure nature with no signs of civilization. Then, we reached the island of Osa seeing the rainforest and the beach, you can really smell the forest and the sea. After we passed Drake Bay we went down to 50m and cruised along the coastline. While flying slowly we were able to look for birds and flowers in the treetops. Then we flew together with the red macaws before reaching Carate.

After landing we had to decide if we first jump in the ocean or check in at our hotel, as the hotel is right on the side of the airstrip. We first checked in at Finca Exotica, which is truly the closest you can get to nature without losing the comfort you need to sleep on a good bed and in a perfect climate without worrying about mosquitos…In the huge gardens the owners planted hundreds of eatable plants that I did not know about. Markus and Gabriella, the owners of this place create the most delicious meals out of this. They have a pure organic lifestyle and a beautiful yoga plattform to relax.

We decided to do one 6h walk inside the Corcovado jungle and the rest of the time we spent walking and relaxing on the endless lonesome beach. After 2 days in this jungle paradise and a last breakfast made by Gabriella we got ready for our way back.

After lift of we climbed along the coastline to gain some altitude before crossing the endless jungle of Corcovado to the gulf side. Golfo dulce, where the dolphins and manatees live in calm waters with amazing colors. We followed the coastline low level before climbing over mangroves of Sierpe again to Bahia de las Ballenas. And this time we were lucky, the Wales gave us a private show, a big one and a baby we playing right below us we circled in 1000ft and at least for me time stood still.

We landed in the Flying crocodile in the early afternoon full of impressions that I will never forget.
We could not stop smiling and that night I dreamed to fly over the endless ocean like a pelican...

leaving Monday the second at 6:30 am Return Wednesday at 4:30 pm

max weight of luggage is 10kg